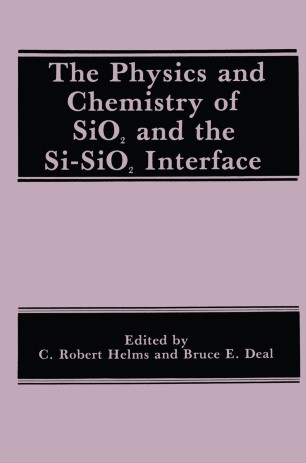 The Physics and Chemistry of SiO2 and the Si-SiO2 Interface

The properties of Si02 and the Si-Si02 interface provide the key foundation onto which the majority of semiconductor device technology has been built Their study has consumed countless hours of many hundreds of investigators over the years, not only in the field of semiconductor devices but also in ceramics, materials science, metallurgy, geology, and mineralogy, to name a few. These groups seldom have contact with each other even though they often investigate quite similar aspects of the Si02 system. Desiring to facilitate an interaction between these groups we set out to organize a symposium on the Physics and Chemistry of Si()z and the Si-Si()z Interface under the auspices of The Electrochemical Society, which represents a number of the appropriate groups. This symposium was held at the 173rd Meeting of The Electrochemical Society in Atlanta, Georgia, May 15-20, 1988. These dates nearly coincided with the ten year anniversary of the "International Topical Conference on the Physics of Si02 and its Interfaces" held at mM in 1978. We have modeled the present symposium after the 1978 conference as well as its follow on at North Carolina State in 1980. Of course, much progress has been made in that ten years and the symposium has given us the opportunity to take a multidisciplinary look at that progress.