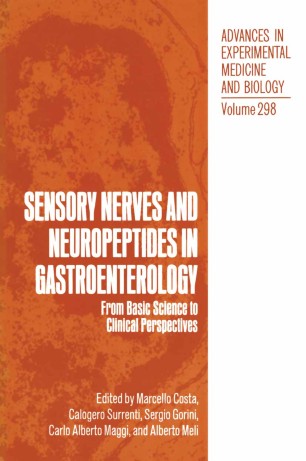 Sensory Nerves and Neuropeptides in Gastroenterology

From Basic Science to Clinical Perspectives

Part of the Advances in Experimental Medicine and Biology book series (AEMB, volume 298)

In the past 15 years much evidence has accumulated which indicates the paramount importance of sensory nerves in reg­ ulating functions of the gastrointestinal tract. In parallel, the attention of researchers in this field has been increas­ ingly attracted to the role played by neuropeptides in the normal and diseased gut. Basic research on the peculiar properties of capsaicin, the pungent ingredient from plants of the genus Capsicum, has allowed the gap between these two areas of research to be bridged. Sincethen, the study of gut afferents and neuropeptides has become more and more interconnected and recognized as a major avenue to understand­ ing the pathophysiology of various human diseases. It is widely recognized that a certain subset of primary afferents synthesize, store and release neuropeptides (such as tachykin­ nins and calcitonin gene-related peptide) from their central and peripheral endings, the latter being widely distributed in the alimentary canal and related organs (liver, pancreas). The First International Meeting on Sensory Nerves and Neuropeptides in Gastroenterology, held in Florence from December 4-5, 1989, sponsored and organized by Fondazione Internazionale Menarini, aimed to focus the current status of research in this field. The contributions presented at the meeting and in this book delineate a suggestive scenario in which sensory nerves of the gut, and the multiple messages they carry through the release of neuropeptides, are to be considered as a major target for the development of new drugs potentially useful in a number of diseases of the gastro­ intestinal tract.