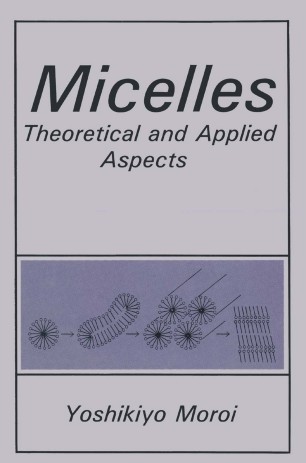 Almost thirty years ago the author began his studies in colloid chemistry at the laboratory of Professor Ryohei Matuura of Kyushu University. His graduate thesis was on the elimination of radioactive species from aqueous solution by foam fractionation. He has, except for a few years of absence, been at the university ever since, and many students have contributed to his subsequent work on micelle formation and related phenomena. Nearly sixty papers have been published thus far. Recently, in search of a new orientation, he decided to assemble his findings and publish them in book form for review and critique. In addition, his use of the mass action model of micelle has received much criticism, especially since the introduction of the phase separation model. Many recent reports have postulated a role for Laplace pressure in micellization. Although such a hypothesis would provide an easy explanation for micelle formation, it neglects the fact that an interfacial tension exists between two macroscopic phases. The present book cautions against too ready an acceptance of the phase separation model of micelle formation. Most references cited in this book are studies introduced in small group meetings of colloid chemists, the participants at which included Professors M. Saito, M. Manabe, S. Kaneshina, S. Miyagishi, A. Yamauchi, H. Akisada, H. Matuo, M. Sakai, and Drs. O. Shibata, N. Nishikido, and Y. Murata, to whom the author wishes to express his gratitude for useful discussions.