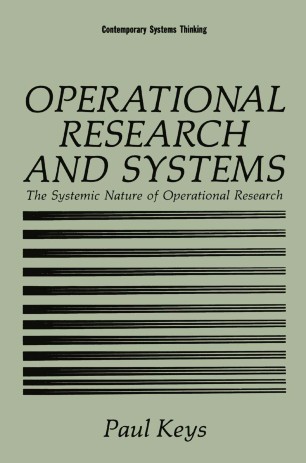 The Systemic Nature of Operational Research

Contemporary Systems Thinking is a series of texts, each of which deals comparatively and/or critically with different aspects of holistic thinking at the frontiers of the discipline. Traditionally, writings by systems thinkers have been concerned with single theme propositions such as general systems theory, cybernetics, operations research, system dyna­ mics, soft systems methodology, and many others. Recently there have been attempts to fulfil a different, yet equally important, role by com­ parative analyses of viewpoints and approaches, each addressing dispa­ rate areas of study such as modeling and simulation, measurement, management, "problem-solving" methods, international relations, so­ cial theory, and last, but not exhaustively or least, philosophy. In a recent book these were drawn together within a multiform framework as part of an eclectic discussion-a nearly impossible task as I dis­ covered (see Dealing with Complexity-An Introduction to the Theory and Application of Systems Science by R. L. Flood and E. R. Carson). Neverthe­ less, bringing many sources together led to several achievements, among which was showing a great diversity of approaches, ideas, and application areas that systems thinking contributes to (although often with difficulties remaining unresolved). More important, however, while working on that manuscript I became aware of the need for and potential value in a series of books, each focusing in detail on the study areas mentioned above.