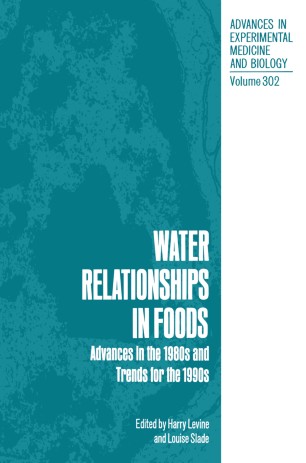 Part of the Advances in Experimental Medicine and Biology book series (AEMB, volume 302)

This book was developed from the papers presented at a symposium on "Water Relationships in Foods," which was held from April 10-14, 1989 at the 197th National Meeting of the American Chemical Society in Dallas, Texas, under the auspices of the Agricultural and Food Chemistry Division of ACS. The editors of this book organized the symposium to bring tagether an es­ teemed group of internationally respected experts, currently active in the field of water relationships in foods, to discuss recent advances in the 1980's and future trends for the 1990's. It was the hope of all these con­ tributors that this ACS symposium would become a memorable keystone above the foundation underlying the field of "water in foods. " This strong foundation has been constructed in large part from earlier technical conferences and books such as the four milestone International Symposia on the Properties of Water (ISOPOW I-IV), the recent IFT BasicSymposium on "Water Activity" and Penang meeting on Food Preservation by Maisture Control, as well as the key fundamental contributions from the classic 1980 ACS Symposium Series #127 on Water in Polymers, and from Felix Franks' famous seven-volume Comprehensive Treatise on Water plus five subsequent volumes of the ongoing Water Science Reviews. The objective of the 1989 ACS symposiumwas to build on this foun­ dation by emphasizing the most recent and maj or advanc.