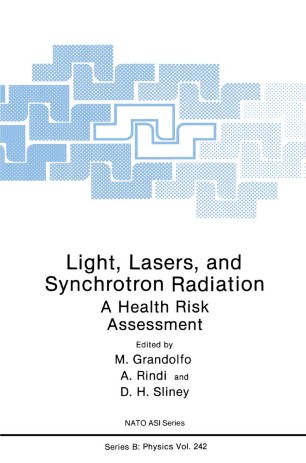 This volume contains the formal record of the lectures presented at the 9th Course of the International School of Radiation Damage and Protection held at the "E . Majorana" International Centre for Scientific Culture in Erice (Italy) from May 9 to May 20, 1989. This course was the last of a series of 4 courses, started in 1981, that were dedicated to the assessment of risk hazard from non-ionizing radiation. The proceedings of these courses were all published by Plenum Press with the following headings: 1) M. Grandolfo, S. M. Michaelson and A. Rindi, Eds. : "Biological Effects and Dosimetry of Nonionizing Radiation; Radiofrequency and Microwave Energy", Plenum Press, New York, NATO ASI Series A Life Sciences, Vo1. 49 (1983); 2) M. Grandolfo, S. M. Michaelson and A. Rindi, Eds. : "Biological Effects and Dosimetry of Static and ELF Electromagnetic Fields", Plenum Press, New York, E. Majorana International Science Series, Life Sciences, Vol. 19 (1985) ; 3) M. H. Repacholi, M. Grandolfo and A. Rindi, Eds. : "Ultrasound; medical applications, biological effects and hazard potential", Plenum Press, New York (1987). We hope that all these volumes together may represent a complete textbook and a reference for the students and scientists interested in the physics, biology, measurement and dosimetry, health effects and standard setting, in short, the risk assessment of that wide field of radiation presently classified as non-ionizing radiation. We are indebted to the Associa?ione Italiana Protezione dalle Radiazioni (AIRP), The Internat:l.