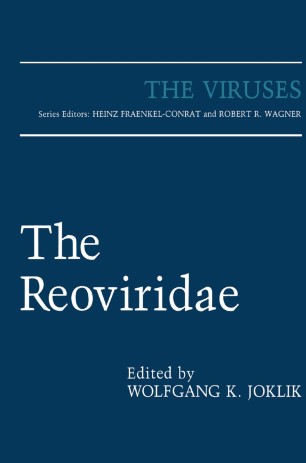 It is now just 20 years since Gomatos and his co-workers at the Rocke­ feller University showed that the nucleic acid in reovirus particles is double-stranded RNA (dsRNA). This discovery created great excitement, for dsRNA was at that time under intense investigation as the replicative form of viral genomes consisting of single-stranded RNA. An equally interesting and important finding followed soon after: it was found that the reovirus genome consists, not of a single nucleic acid molecule, but of 10 discrete "segments," each with its specific sequence content and each transcribed into its own messenger RNA. It is clear now that these segments are genes. Not surprisingly, the availability of a viral genome 10 unlinked genes has permitted some unique lines of in­ consisting of vestigation in molecular biology. Mammalian and avian reoviruses proved to be but the first of several viruses recognized as sharing Similarity in size and morphology and ge­ nomes consisting of 10, II, or 12 separate genes. These viruses are dis­ tributed throughout living organisms; among the natural hosts of mem­ bers of this virus family are vertebrates, Insects, and plants. Members of the Reoviridae family differ widely in the virulence that they exhibit toward their hosts . . For example, the first discovered mam­ malian reovirus literally is, as the name signifies, a "respiratory enteric orphan" virus, that is, a virus unassociated with disease.