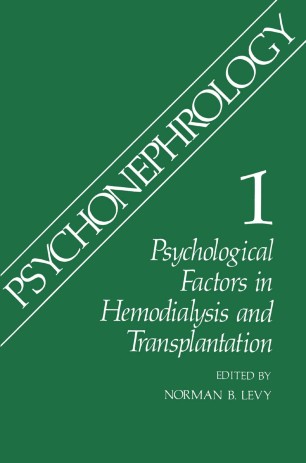 Psychological Factors in Hemodialysis and Transplantation

Major nephrological and psychological organizations have, at best, set aside only small portions of their programs for papers or panels devoted to the psychological aspect of patients with end-stage renal disease. Thus, the increased need for information concerning the psychological aspects of end-stage renal disease has been met by occasional journal articles, professional peer discussions, small portions of national confer­ ences, and informal conversations and consultations with people with clinical and research experience in these areas. The First International Conference on Psychological Factors in Hemodialysis and Transplantation arose out of a need to have a forum in which the major people involved in treatment and research in this area could share their latest work among themselves and with the registrants. The initial encouragement for organizing such a conference came from the rank and file of nephrology social workers, nephrology nurses, and liaison psychiatrists and psychologists. In early 1977 I had decided that I would make an effort to organize such a meeting and asked the two other individuals most closely identified with major research in this area, Atara Kaplan De-Nour and Harry S. Abram, to join me in planning this confer­ ence. With their support and suggestions concerning the program, I embarked upon an attempt to raise financial backing for it. I was some­ what surprised to find that the many equipment and drug companies supporting nephrological conferences were not greatly interested in this one.