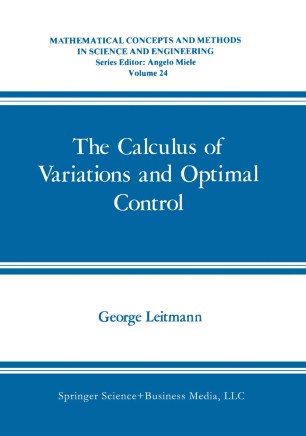 The Calculus of Variations and Optimal Control

Part of the Mathematical Concepts and Methods in Science and Engineering book series (MCSENG, volume 24)

When the Tyrian princess Dido landed on the North African shore of the Mediterranean sea she was welcomed by a local chieftain. He offered her all the land that she could enclose between the shoreline and a rope of knotted cowhide. While the legend does not tell us, we may assume that Princess Dido arrived at the correct solution by stretching the rope into the shape of a circular arc and thereby maximized the area of the land upon which she was to found Carthage. This story of the founding of Carthage is apocryphal. Nonetheless it is probably the first account of a problem of the kind that inspired an entire mathematical discipline, the calculus of variations and its extensions such as the theory of optimal control. This book is intended to present an introductory treatment of the calculus of variations in Part I and of optimal control theory in Part II. The discussion in Part I is restricted to the simplest problem of the calculus of variations. The topic is entirely classical; all of the basic theory had been developed before the turn of the century. Consequently the material comes from many sources; however, those most useful to me have been the books of Oskar Bolza and of George M. Ewing. Part II is devoted to the elementary aspects of the modern extension of the calculus of variations, the theory of optimal control of dynamical systems.