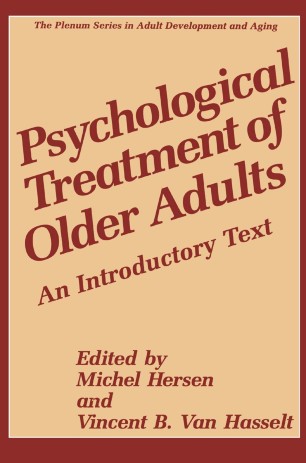 This multiauthored introductory textbook could not have been conceived or brought to fruition 10 or 15 years ago. Indeed, at that time relatively little attention was accorded to the psychological needs of older adults. The general tenor of the field then was that older adults would not benefit from psychological intervention. As we now know, this was a faulty assumption that has been discredited with empirical data. Indeed, clinical research data adduced, primar­ ily in the last decade, clearly documents that older adults do benefit from specific psychotherapies that are tailored to their unique presentation of symptoms. Given the explosion of interest in this area (as evinced by increased investi­ gatory activity, national funding, and media attention) and the increased number of masters-and doctoral-level courses devoted to this topic, we felt that the time was right for a textbook in the area. Such flurry of activity also has been fueled by statistics showing how our population by the year 2030 will consist of 30% who are senior citizens. Moreover, since 12% of older adults in the community are estimated to have diagnosable psychiatric disorders and 40% to 50% of older adult medical inpatients have a concomitant psychiatric disorder, the task for clinicians in the next century will be overwhelming.