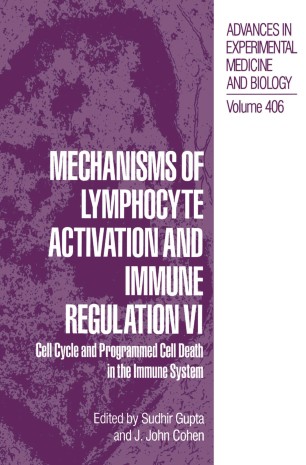 Cell Cycle and Programmed Cell Death in the Immune System

Part of the Advances in Experimental Medicine and Biology book series (AEMB, volume 406)

Since programmed cell death was first described in insects in 1964 and apoptosis was described in 1972, rapid progress has been made in understanding the basic mechanisms and genes regulating programmed cell death and apoptosis. In addition, defects in various genes regulating programmed cell death have been delineated in several experimental models of human diseases. This volume surveys various aspects of these rapidly developing areas of research in programmed cell death/apoptosis. This volume should be of interest to basic immunologists and molecular biologists. The volume begins with a historical perspective of cell death. The remainder of the volume is divided into four different parts. Part I deals with the signaling pathways in apoptosis, including cell cycle control of apoptosis, role of ceramide in apoptosis, role of antibody signaling, and biochemical regulation of apoptosis. The mechanisms for recognition of apoptotic lymphocytes by macrophages are also reviewed. Part II examines the role of various genes that regulate apoptosis, including the role ofFas, FasL, and other TNF family members in apoptosis and homeostatic regulation of immune response. Recently described splice variants and their influence on apoptosis are also reviewed, and the role of the members of the Bcl-2 family in apoptosis is discussed in detail. Part III reviews various aspects of apoptosis in B lymphocytes, including mechanisms that regulate apoptosis/survival of B lymphocytes and the regulation of Fas-mediated apoptosis in B lymphocytes.

`This book is a valuable addition to the literature.'
Quarterly Review of Biology, March 1998
Buy options