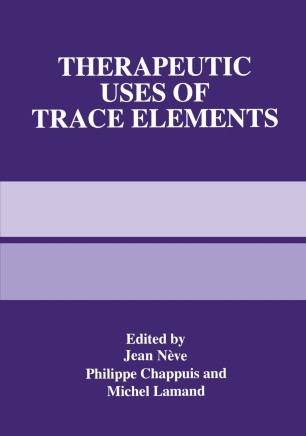 Organized by the French Speaking Society for Study and Research on Essential Trace Elements (SFERETE), the Fifth International Congress on Trace Elements in Medicine and Biology "Therapeutic Uses of Trace Elements" was held February 4-7. 1996, in Meribel (Savoy, France). This resort is situated in the heart of the Three Valleys domain, at the gate­ way of the beautiful Vanoise National Park. More than 250 participants covering six conti­ nents attended the meeting. This volume contains the text of plenary lectures and of several oral and poster communications. Trace element deficiencies are not only encountered in developing countries or during malnutrition. Subclinical features are also observed in developed societies where they consti­ tute a background for an impressive number of pathological states. Preventive and curative treatments with commercial products are often prescribed without reliable studies about their clinical interest or potential efficiency. By contrast empirical approaches such as the catalytic therapy, nutritional and pharmacological aspects of trace elements were emphasized on a sci­ entific basis to favor their rational therapeutic use.