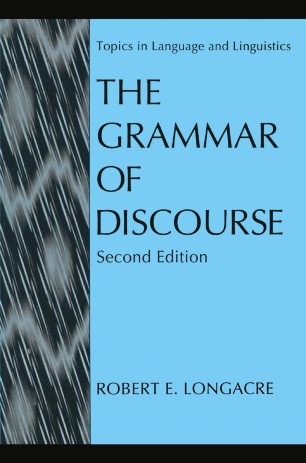 The Grammar of Discourse

In that The Anatomy of Speech Notions (1976) was the precursor to The Grammar of Discourse (1983), this revision embodies a third "edition" of some of the material that is found here. The original intent of the 1976 volume was to construct a hierarchical arrangement of notional categories, which find surface realization in the grammatical constructions of the various languages of the world. The idea was to marshal the categories that every analyst-regardless of theoretical bent-had to take account of as cognitive entities. The volume began with a couple of chapters on what was then popularly known as "case grammar," then expanded upward and downward to include other notional categories on other levels. Chapters on dis­ course, monologue, and dialogue were buried in the center of the volume. In the 1983 volume, the chapters on monologue and dialogue discourse were moved to the fore of the book and the chapters on case grammar were made less prominent; the volume was then renamed The Grammar of Discourse. The current revision features more clearly than its predecessors the intersection of discourse and pragmatic concerns with grammatical structures on various levels. It retains and expands much of the former material but includes new material reflecting current advances in such topics as salience clines for discourse, rhetorical relations, paragraph structures, transitivity, ergativity, agency hierarchy, and word­ order typologies.

From reviews of the First Edition:
`A comprehensive and cohesive description of text discourse ... provides a challenging and stimulating vehicle for expanding the horizons of readers having a concern for discourse analysis.'
Applied Psycholinguistics
`Because of the richness and breadth of its examples (drawn from many languages), the book should be of interest to those who are seriously interested in the psychology of text and discourse processing.'
Contemporary Psychology