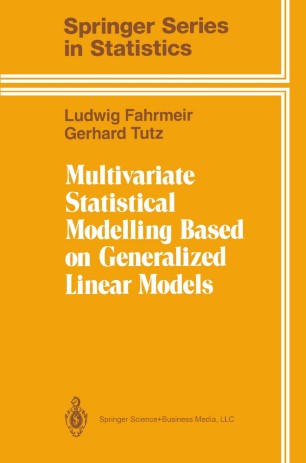 Classical statistical models for regression, time series and longitudinal data provide well-established tools for approximately normally distributed vari­ ables. Enhanced by the availability of software packages these models dom­ inated the field of applications for a long time. With the introduction of generalized linear models (GLM) a much more flexible instrument for sta­ tistical modelling has been created. The broad class of GLM's includes some of the classicallinear models as special cases but is particularly suited for categorical discrete or nonnegative responses. The last decade has seen various extensions of GLM's: multivariate and multicategorical models have been considered, longitudinal data analysis has been developed in this setting, random effects and nonparametric pre­ dictors have been included. These extended methods have grown around generalized linear models but often are no longer GLM's in the original sense. The aim of this book is to bring together and review a large part of these recent advances in statistical modelling. Although the continuous case is sketched sometimes, thoughout the book the focus is on categorical data. The book deals with regression analysis in a wider sense including not only cross-sectional analysis but also time series and longitudinal data situations. We do not consider problems of symmetrical nature, like the investigation of the association structure in a given set of variables. For example, log-linear models for contingency tables, which can be treated as special cases of GLM's are totally omitted. The estimation approach that is primarily considered in this book is likelihood-based.