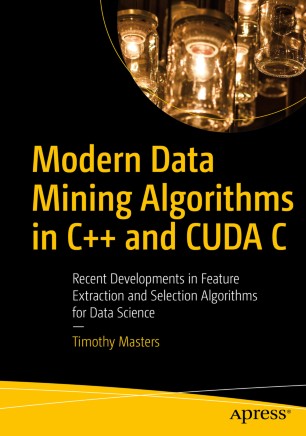 As a serious data miner you will often be faced with thousands of candidate features for your prediction or classification application, with most of the features being of little or no value. You’ll know that many of these features may be useful only in combination with certain other features while being practically worthless alone or in combination with most others. Some features may have enormous predictive power, but only within a small, specialized area of the feature space. The problems that plague modern data miners are endless. This book helps you solve this problem by presenting modern feature selection techniques and the code to implement them. Some of these techniques are:

All algorithms are intuitively justified and supported by the relevant equations and explanatory material. The author also presents and explains complete, highly commented source code.

The example code is in C++ and CUDA C but Python or other code can be substituted; the algorithm is important, not the code that's used to write it.

Timothy Masters has a PhD in statistics and is an experienced programmer. His dissertation was in image analysis. His career moved in the direction of signal processing, and for the last 25 years he's been involved in the development of automated trading systems in various financial markets.