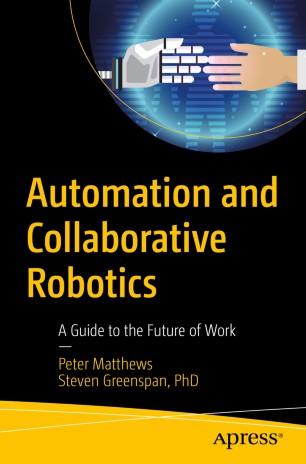 A Guide to the Future of Work

Understand the current and future research into technologies that underpin the increasing capabilities of automation technologies and their impact on the working world of the future.

Rapid advances in automation and robotics technologies are often reported in the trade and general media, often relying on scary headlines such as “Jobs Lost to Robots.” It is certainly true that work will change with the advent of smarter and faster automated workers; however, the scope and scale of the changes is still unknown. Automation may seem to be here already, but we are only at the early stages.

Automation and Collaborative Robotics explores the output of current research projects that are improving the building blocks of an automated world. Research into collaborative robotics (cobotics) is merging digital, audio, and visual data to generate a commonly held view between cobots and their human collaborators. Low-power machine learning at the edge of the network can deliver decision making on cobots or to their manipulations. Topics covered in this book include:

Peter Matthews, based in the UK, is a writer and research scientist. Peter has more than 40 years of IT experience ranging from mainframe/Unix programming, development and relational databases to secure cloud computing, DevOps and cobotics. Peter’s research work has been concerned with leading edge technology for a major proportion of that time. Projects have included machine learning algorithms for soccer clubs, multi-level secure database systems and object-oriented application infrastructures. He has also led groups investigating the influence of macro social, political and economic trends on future technology.

Peter’s current research is focused on automation and robotics. Past research has covered Internet of Things, cloud computing, data curation, smart buildings and cobotics. Peter has been the CA project lead on cobotics under the auspices of the Centre for Visual and Decision Informatics, a USA National Science Foundation initiative.

Peter has authored and co-authored academic papers including “Data Is the New Currency” in the proceedings of New Security Paradigms Workshop. Other writing includes books on “Ingres Visual Programming”, co-authoring of “The Innovative CIO: How IT Leaders Can Drive Business Innovation” and co-editor/contributor to “MOdel-Driven Approach for design and execution of applications on multiple Clouds”

Steven Greenspan, PhD is an innovator of information and communications technology (ICT), with over 50 publications in peer-reviewed journals and 79 US patents, including the first patent to describe two-factor and two-device authentication and authorization. This invention is widely used throughout the world to ensure secure access to web services and it showcased the value of keeping the human-in-the-loop. His current research interests include user experience and collaboration in complex systems, differential privacy, ethical decision-making, and innovative approaches for integrating scientific research into socially responsible applications and services. Outside of his professional work, he devotes much of his time to community groups that focus on environmental, economic and social justice. He also serves on the advisory boards of the AABGU/ Philadelphia Academic Bridge, and several startups.

Steve has a PhD in Cognitive Psychology from the State University of New York at Buffalo and conducted postdoctoral research at the University of California at San Diego and Indiana University. During the writing of this book, he was a Visiting Scholar at the University of Virginia. Previously, he was a Research Scientist and Vice President of Strategic Research at CA Technologies managing an international team of information technology scientists. He has also consulted to Avaya on the UX design of mobile phones, and was a Distinguished Member of the Technical Staff at AT&T Bell Laboratories.