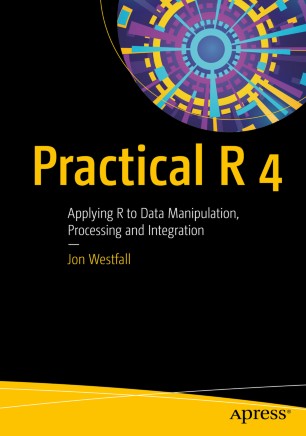 Get started with an accelerated introduction to the R ecosystem, programming language, and tools including R script and RStudio. Utilizing many examples and projects, this book teaches you how to get data into R and how to work with that data using R. Once grounded in the fundamentals, the rest of Practical R 4 dives into specific projects and examples starting with running and analyzing a survey using R and LimeSurvey. Next, you'll carry out advanced statistical analysis using R and MouselabWeb. Then, you’ll see how R can work for you without statistics, including how R can be used to automate data formatting, manipulation, reporting, and custom functions.

The final part of this book discusses using R on a server; you’ll build a script with R that can run an RStudio Server and monitor a report source for changes to alert the user when something has changed. This project includes both regular email alerting and push notification. And, finally, you’ll use R to create a customized daily rundown report of a person's most important information such as a weather report, daily calendar, to-do's and more. This demonstrates how to automate such a process so that every morning, the user navigates to the same web page and gets the updated report.

Jon Westfall is an award-winning professor, published author, and practicing cognitive scientist. He teaches a variety of courses in psychology, from introduction to psychology to upper-level seminars. His current research focuses on the variables that influence economic and consumer finance decisions, and the retention of college students. With applications to both psychology and marketing, his work finds an intersection between basic and applied science. His current appointment is as an assistant professor of psychology, coordinator of the first year seminar program, and coordinator of the Okra Scholars program at Delta State University. Previously he was a visiting assistant professor at Centenary College of Louisiana, and the associate director for research and technology at the Center for Decision Sciences, a center within Columbia Business School at Columbia University in New York City. He now maintains a role with Columbia as a research affiliate and technology consultant.
In addition to his research, Dr. Westfall also has career ties in information technology, where he has worked as a consultant since 1997, founding his own firm, Bug Jr. Systems. As a consultant he has developed custom software solutions (including native Windows 32 applications, Windows .NET applications, Windows Phone 7 and Android mobile applications, as well as ASP, ASP.NET, and PHP web applications). He has also served as a senior network and systems architect and administrator (on both Windows and Unix networks, and hybrids) and has also been recognized as a Microsoft Most Valuable Professional (MVP) 2008 – 2012. He has authored several books, and presented at academic as well as technology conferences and gatherings.