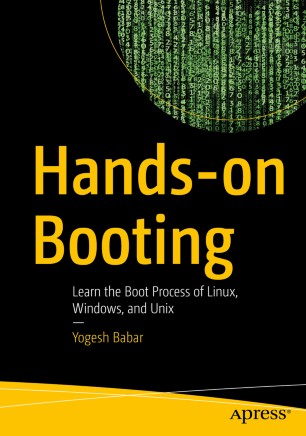 Learn the Boot Process of Linux, Windows, and Unix

Hands-on Booting begins by explaining what a bootloader is, starting with the Linux bootloader followed by bootloaders for Windows and Unix systems. Next, you’ll address the BIOS and UEFI firmware by installing multiple operating systems on one machine and booting them through the Linux bootloader. Further, you’ll see the kernel's role in the booting procedure of the operating system and the dependency between kernel, initramfs, and dracut. You’ll also cover systemd, examining its structure and how it mounts the user root filesystem. In the final section, the book explains troubleshooting methodologies such as debugging shells followed by live images and rescue mode.

On completing this book, you will understand the booting process of major operating systems such as Linux, Windows, and Unix. You will also know how to fix the Linux booting issues through various boot modes.

Yogesh has been with Red Hat for the past 10 years. He is presently working as a principal technical support engineer in the Linux kernel domain. He specializes in troubleshooting and tuning the performance issues of Linux enterprise servers. The Linux boot process is his forte and he regularly speaks at open source conferences and forums. He also conducts workshops on operating systems for engineering students.