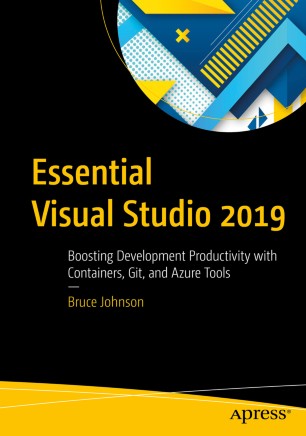 Discover how Visual Studio 2019 can improve your development process.

Visual Studio is an integral part of the daily life of millions of developers worldwide. Even as this rich integrated development environment approaches two decades, it has never ceased in innovating ways to make developers’ work life more productive.

Essential Visual Studio 2019 offers explicit guidance for the developer who is already familiar with Visual Studio, but might feel a little lost when it comes to understanding the more recent features and advances of the IDE. Busy developers simply don’t have the time to digest and distill what the latest and greatest tools are with each version. As a result, useful process and performance features may be overlooked. This book, by simply focusing on the most recent innovations in Visual Studio and its tangential developer market, is the perfect "go to" for bridging that gap.

Be ready to plunge headfirst into key features and advances that have been added, expanded, or improved, and topics such as unit testing, refactoring, Git, debugging, containers, and more. You will procure the basic concepts and value first, before diving into hands-on code that is designed to quickly get you up and running.

This book is for developers who use Visual Studio on a daily basis. Familiarity with earlier versions is helpful, as the book is not a soup-to-nuts survey of the IDE and some basic functions will not be covered.
Bruce Johnson is co-founder and partner at ObjectSharp Consulting. With more than three decades of experience, he has expertise in rich client application development, web applications and API, microservices, and front end development. Formerly a Microsoft Certified Trainer (MCT), Bruce enjoys teaching and presenting in the developer community. He is currently co-president of the Metro Toronto .NET User Group and is the author of many books, articles, and columns.

​Bruce Johnson is co-founder and partner at ObjectSharp Consulting. He has more than three decades of experience, starting in UNIX, but then moved into the Windows development world. Over the course of his career, he gained expertise in rich client applications, web applications, and APIs, with a dash of database, microservices, and front-end development thrown in. After 20 years, it is almost impossible not to become a full-stack developer.

Formerly a Microsoft MVP and MCT, Bruce enjoys teaching and presenting within the developer community. He has spoken hundreds of times at conferences and user groups throughout North America and Europe. He is the author of many books, articles, and columns. He can be reached on Twitter at @LACanuck and LinkedIn at bruce-johnson-95b468.