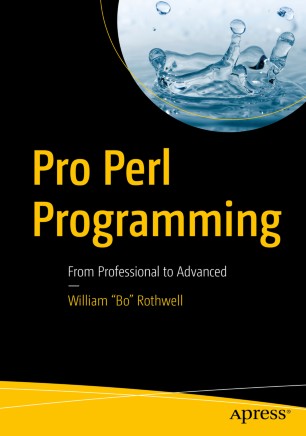 From Professional to Advanced

Master intermediate to advanced techniques of the Perl programming language starting with a focus on regular expressions and some of their advanced features. This book then covers other pro-level features, including formatted output, file handling, and more.

Pro Perl Programming is a professional-level reference guide on Perl and includes important aspects of it that you need as a professional programmer.

At the impressionable age of 14, William "Bo" Rothwell crossed paths with a TRS-80 Micro Computer System (affectionately known as a “Trash 80”).  Soon after the adults responsible for Bo made the mistake of leaving him alone with the TSR-80.  He immediately dismantled it and held his first computer class, showing his friends what made this “computer thing” work. Since this experience, Bo’s passion for understanding how computers work and sharing this knowledge with others has resulting in a rewarding career in IT training.  His experience includes Linux, Unix, DevOps tools, and programming languages such as Perl, Python, Tcl, and BASH.