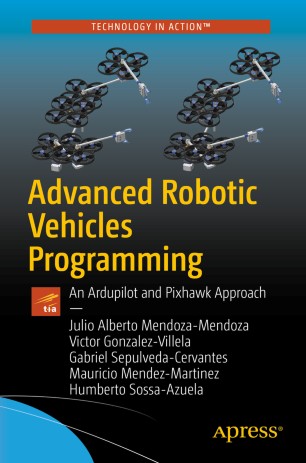 An Ardupilot and Pixhawk Approach

Learn how to program robotic vehicles with ardupilot libraries and pixhawk autopilot, both of which are open source technologies with a global scope. This book is focused on quadcopters but the knowledge is easily extendable to three-dimensional vehicles such as drones, submarines, and rovers.

Pixhawk and the ardupilot libraries have grown dramatically in popularity due to the fact that the hardware and software offer a real-time task scheduler, huge data processing capabilities, interconnectivity, low power consumption, and a global developer support.

This book shows you how take your robotic programming skills to the next level. From hardware to software, Advanced Robotic Vehicles Programming links theory with practice in the development of unmanned vehicles. By the end of this book, you’ll learn the pixhawk software and ardupilot libraries to develop your own autonomous vehicles.

Understand popular scientific and technical nomenclature in the field

Julio Mendoza-Mendoza earned his computing doctoral degree at CIC IPN in 2016, where he specialized in underactuated robotics, UAS, and intelligent and nonlinear control. He also earned his advanced-technologies master degree and mechatronics-engineering bachelor at UPIITA IPN, in 2011 and 2008 respectively. Currently, Julio is working on 5 patents related to his research field and developing his flying serial-robot manipulator theory at FI UNAM through his postdoctoral 2017 DGAPA grant.
V. J. Gonzalez-Villela received his B.Eng. degree in Mechanical and Electrical Engineering and the M.Eng. degree in Electrical Engineering in 1987 and 1993, respectively, from the National Autonomous University of Mexico (UNAM), and a Ph.D. degree in Kinematics, Dynamics, and Nonlinear Systems applied to Mobile Robot Modelling and Control from Loughborough University, Loughborough, UK, in 2006. He is currently a Titular Professor in the Department of Mechatronics Engineering, UNAM. His research focuses on Mobile, Hybrid and Adaptive Robots, and Artificial Intuition.