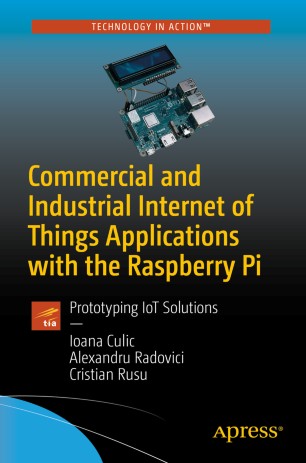 Commercial and Industrial Internet of Things Applications with the Raspberry Pi

This book presents real-life IoT applications based on the Raspberry Pi, beyond the relatively simplistic demos built for educational purposes or hobbyists. You'll make the transition from tinkering with a couple of sensors and simple devices to building fully developed products for commercial use and industrial systems. You'll also work with sensors and actuators, web technologies used for communications in IoT networks, and the large-scale deployment of IoT software solutions. And see how to design these systems as well as maintain them long term.

See the Raspberry Pi in a new light that highlights the true industrial potential of the device. Move beyond connecting an LED to the Raspberry Pi and making it blink to actually managing a network of IoT devices.

Ioana Culic is a PhD candidate in the field of Internet of Things and the co-founder of Wyliodrin, a company that offers educational and industrial IoT solutions. Wyliodrin’s target is to offer educational platforms for IoT. They have developed a large set of written and video educational materials to complement their solutions. Much of this material was coordinated and contributed to by Ioana.

Alexandru Radoviciis the CTO of Wyliodrin and earned a PhD in mobile technologies from University Politehnica of Bucharest, where he now works as an associate professor. He has taught and prepared materials for advanced IT classes. He has contributed to several books and articles on how to build Internet of Things applications.