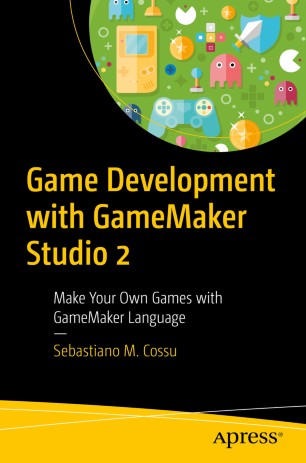 Make Your Own Games with GameMaker Language

Game Development with GameMaker Studio 2 covers all aspects of game design and development from the initial idea to the final release, using an award-winning game engine. You learn how to create real-world video games based on classic and legendary video game genres. Each game project introduces and explains concepts of game development and design and coding principles, allowing you to build a wide set of skills while creating an exciting portfolio to kick-start a career in game development.

Author Sebastiano Cossu teaches you to design levels in your games, draw sprites to populate your virtual worlds, program game objects for interaction with the player, incorporate custom music and sound effects, build GUIs for your menus and game interfaces, and support keyboard, mouse, and gamepad controls in your projects. He shows you how to build cross-platform games to run on all desktop platforms (Windows, Linux, Mac OS) and publish them on the most popular game stores such as Steam, GOG, Humble Store, and Itch.io.