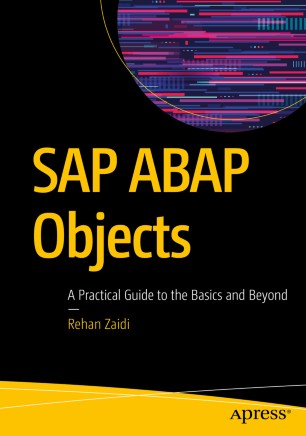 A Practical Guide to the Basics and Beyond

Understand ABAP objects—the object-oriented extension of the SAP language ABAP—in the latest release of SAP NetWeaver 7.5, and its newest advancements. This book begins with the programming of objects in general and the basics of the ABAP language that a developer needs to know to get started. The most important topics needed to perform daily support jobs and ensure successful projects are covered.

ABAP is a vast community with developers working in a variety of functional areas. You will be able to apply the concepts in this book to your area. SAP ABAP Objects is goal directed, rather than a collection of theoretical topics. It doesn't just touch on the surface of ABAP objects, but goes in depth from building the basic foundation (e.g., classes and objects created locally and globally) to the intermediary areas (e.g., ALV programming, method chaining, polymorphism, simple and nested interfaces), and then finally into the advanced topics (e.g., shared memory, persistent objects). You will know how to use best practices to make better programs via ABAP objects.