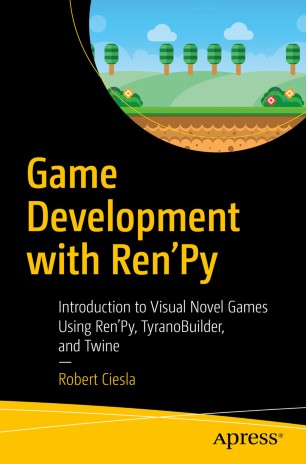 Get your feet wet in developing visual novels and take a guided tour through easy to follow tutorials using three of the most popular tools (Ren'Py, TyranoBuilder, and Twine). This book uses a two-pronged approach into the fine art of text-based games, showing you what makes for compelling writing as well as the programming logic and techniques needed to bring your visual novels to life.

In this book, you will uncover the rich history of interactive fiction from the bare-bones 1970s games to the audiovisually rich modern output. You will take a detailed look at how to work with some of the most popular and exotic sub-genres and tropes of interactive fiction, such as nakige ("crying game"), dating sims, and horror. Once the stage is set, you will learn to use all-purpose programming logic and techniques in three mini tutorial games and also learn how to deploy your titles to both desktop and mobile platforms.

Not solely relegated to the ancient historical period of the 1980s and 1990s, interactive fiction has again become appealing to developers as new tools became available. The visual novel is an increasingly popular and potentially lucrative genre of video game, being deployed for Windows, Mac, iOS, Android, and more. Game Development with Ren'Py reveals how multi-platform tools such as Ren'Py, TyranoBuilder, and Twine are becoming ever more plentiful for creating games in this genre.

Robert Ciesla is a freelance writer from Helsinki, Finland. He has a BA in journalism and a knack for writing urban fiction and directing short films. Robert has worked on many video games on several platforms since being a kid in the mid-nineties.