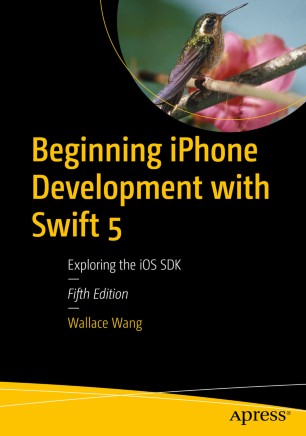 Learn how to integrate all the interface elements iOS users have come to know and love, such as buttons, switches, pickers, toolbars and sliders. In this edition of the best selling book, you’ll also learn about touch gestures, table views, and collection views for displaying data on a user interface.

Assuming little or no working knowledge of the Swift programming language, and written in a friendly, easy-to-follow style, this book offers a comprehensive course in iPhone and iPad programming. The book starts with a gentle introduction to using Xcode and then guides you though the creation of your first simple app.

You’ll start with designing basic user interfaces and then explore more sophisticated ones that involve multiple screens such as navigation controllers, tab bars, page views, and split views that are particularly useful on the larger screens of the iPad and certain iPhone models. And there’s much more!

Wallace Wang is a former Windows enthusiast who took one look at Vista and realized that the future of computing belonged to the Mac. He s written more than 40 computer books, including Microsoft Office for Dummies, Beginning Programming for Dummies, Steal This Computer Book, My New Mac, and My New iPad. In addition to programming the Mac and iPhone/iPad, he also performs stand-up comedy, having appeared on A&E s "Evening at the Improv," and having performed in Las Vegas at the Riviera Comedy Club at the Riviera Hotel & Casino. When he’s not writing computer books or performing stand-up comedy, he also enjoys blogging about screenwriting at his site, The 15 Minute Movie Method, where he shares screenwriting tips with other aspiring screenwriters who all share the goal of breaking into Hollywood.