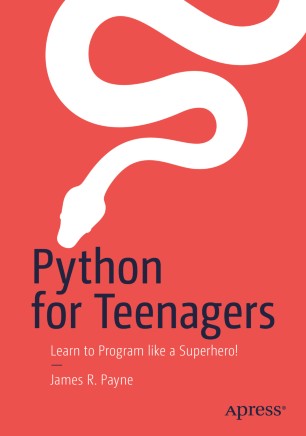 Discover everything you need to learn Python programming, with fun examples along the way. This book gives you ideas for how to turn your love of programming into a job you'll love.
Start with the basics and before you know it, you'll be building your own web sites, doing white-hat hacking, finding code bugs and errors, and creating games, including using Python to roll characters for RPGs. Every chapter is relaxed and informal, like learning with a cool teacher all the time.
Computers, phones and the web are your playground, and you'll be ready to join the party with your own content. Going beyond posts and uploads means learning to program, and Python is a great choice to get started. It's quick to learn, it's flexible, and if you want, it may get you a Python job that pays more than minimum wage when you're out of school. Python for Teenagers is the most fun you'll have while learning.

James R. Payne was introduced to programming when he was just 10 years old. He started off hacking text-based games like Lemonade Stand to gain an advantage while playing and soon started creating his own text-based Role-Playing Games in the style of Dungeons and Dragons and inspired by his favorite comic books. The enjoyment of those early days stuck with him, and he continues to be drawn back into the programming world throughout his career.
Payne is the former Editor-in-Chief/Community Manager of Developer Shed, an online publication and community consisting of 14 websites and forums dedicated to programming, web development, and Internet Marketing. He's written over a thousand articles on coding and marketing, covering virtually every language and platform available. His first book, Beginning Python (Wrox Press) was published in 2010. In addition, he has published over 2,000 articles covering topics ranging from gaming to aerospace/aeronautics, and also writes adult horror and young adult fantasy books.
Payne decided to write this book to pass on his love of development in the hopes that it would inspire future generations to code.