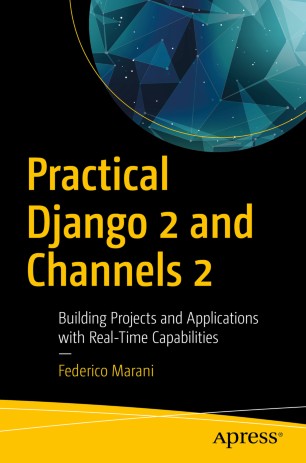 Learn how to rapidly build your own ecommerce site by applying Django’s battle-tested components. This book demonstrates Django’s features and conventions to help you develop modern web applications quickly. You'll adopt a "learn by doing" approach and gain a deeper understanding Django by working through a project in which the real-time component will be critical.

The book starts with the basics and explains the difference between a Django project and a Django app, the most important settings, how to change them, and the fundamentals of packaging. You'll then be introduced to all the standard tools of Django, along with a sample project. The book then moves on to Channels, a recent addition to the Django ecosystem. It extends the framework with support for real-time operations such as Websockets and other asynchronous features.

Federico Marani has been a freelance software engineer and DevOps specialist for over 15 years. With a background in Computer Science and a Msc in Business Psychology, he has worked in companies ranging from e-commerce, finance, medical and banking companies. He started developing web applications with Python 1.5.2 on RedHat systems hasbeen using Django since the first 1.x versions, more than 8 years ago. He now consults on technology strategy and tech teams with startups, and still very hands-on with coding. Open sourced a lot of code online, some of which is part of GNU Social. In his spare time, he enjoys playing drums and running.