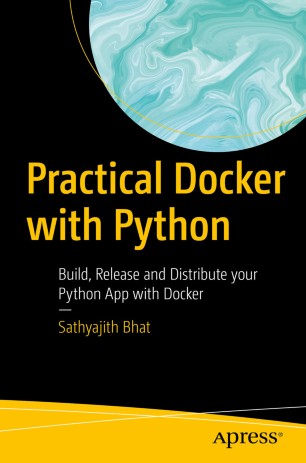 Build, Release and Distribute your Python App with Docker

Learn the key differences between containers and virtual machines. Adopting a project based approach, this book introduces you to a simple Python application to be developed and containerized with Docker.
After an introduction to Containers and Docker you'll be guided through Docker installation and configuration.  You'll also learn basic functions and commands used in Docker by running a simple container using Docker commands.
The book then moves on to developing a Python based Messaging Bot using required libraries and virtual environment where you'll add Docker Volumes to your project, ensuring your container data is safe.
You'll create a database container and link your project to it and finally, bring up the Bot-associated database all at once with Docker Compose.

Sathyajith Bhat is a seasoned DevOps/SRE professional currently working as a DevOps Engineer on Adobe I/O, which is Adobe’s developer ecosystem and community. Prior to this, he was the lead Ops/SRE at Styletag.com. He transitioned to Ops/SRE after being a lead analyst at CGI, working primarily on Oracle Fusion stack (Oracle DB/PL/SQL/Oracle Forms and other related middleware) designing, architecting, and implementing complete end-to-end solutions for a major insurance provider in the Nordics.
In his free time, Sathya is part of the Barcamp Bangalore planning team, handling DevOps and Social Media for BCB. He is also a volunteer Community Moderator at Super User and Web Apps Stack Exchange, keeps the servers for Indian Video Gamer forums up and running, and was previously a Moderator for Chip-India and Tech 2 forums.