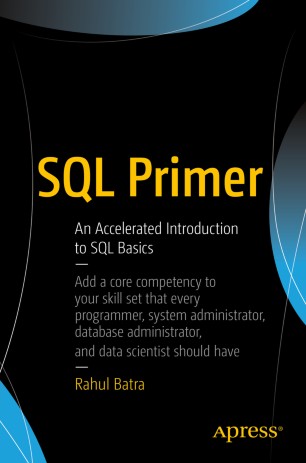 An Accelerated Introduction to SQL Basics

Build a core level of competency in SQL so you can recognize the parts of queries and write simple SQL statements. SQL knowledge is essential for anyone involved in programming, data science, and data management. This book covers features of SQL that are standardized and common across most database vendors. You will gain a base of knowledge that will prepare you to go deeper into the specifics of any database product you might encounter.
Examples in the book are worked in PostgreSQL and SQLite, but the bulk of the examples are platform agnostic and will work on any database platform supporting SQL. Early in the book you learn about table design, the importance of keys as row identifiers, and essential query operations. You then move into more advanced topics such as grouping and summarizing, creating calculated fields, joining data from multiple tables when it makes business sense to do so, and more. Throughout the book, you are exposed to a set-based approach to the language and are provided a good grounding in subtle but important topics such as the effects of null value on query results.
With the explosion of data science, SQL has regained its prominence as a top skill to have for technologists and decision makers worldwide. SQL Primer will guide you from the very basics of SQL through to the mainstream features you need to have a solid, working knowledge of this important, data-oriented language.
What You'll Learn:

​Rahul Batra was first introduced to programming in 1996 with GWBASIC, but he did not seriously foray into programming until 2001 when he started learning C++. Along the way, Rahul dabbled in many other languages such as C, Ruby, Perl, Python, and Lisp. He has worked with databases such as PostgreSQL, Sybase ASA, and SQLite. He is passionate about sharing knowledge, especially with those who are just starting out. Rahul currently lives and works in Gurgaon, India.