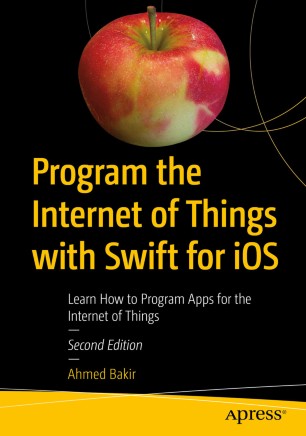 Program the Internet of Things with Swift for iOS

Learn How to Program Apps for the Internet of Things

Learn how to build apps using Apple’s native APIs for the Internet of Things, including the Apple Watch, HomeKit, and Apple Pay. You'll also see how to interface with popular third-party hardware such as the Raspberry Pi, Arduino, and the FitBit family of devices.

Program the Internet of Things with Swift and iOS is an update to the previous version and includes all new Swift 4 code. This book is a detailed tutorial that provides a detailed "how" and "why" for each topic, explaining Apple-specific design patterns as they come up and pulling lessons from other popular apps. To help you getting up and running quickly, each chapter is framed within a working project, allowing you to use the sample code directly in your apps.

The Internet of Things is not limited to Apple devices alone, so this book also explains how to interface with popular third-party hardware devices, such as the Fitbit and Raspberry Pi, and generic interfaces, like Restful API’s and HTTPS. You'll also review new API's like Face ID and new design considerations, and look more closely at SSL and how to make IoT connected apps more resistant to hackers. The coverage of Apple Watch has been expanded as well. The Internet of Things is waiting — be a part of it!

Ahmed Bakir is the founder and president of devAtelier, a mobile-first consulting firm. After getting his start in embedded systems, he made the mistake of telling someone at a party that he was developing iPhone apps for fun and has been inundated in work ever since. He has worked on over 30 mobile projects, including advising startups and architecting apps for Fortune 500 companies. Most recently, he was also invited to develop and teach iOS development at UCSD-Extension. His hobbies include painting, travel, and his never ending quest to discover new coffee shops.