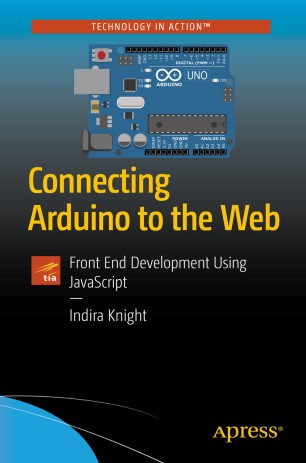 Connecting Arduino to the Web

Create physical interfaces that interact with the Internet and web pages. With Arduino and JavaScript you can create interactive physical displays and connected devices that send data to or receive data from the web. You'll take advantage of the processes needed to set up electronic components, collect data, and create web pages able to interact with electronic components.
Through exercises, projects, and explanations, this book will give you the core front end web development and electronics skills needed to create connected physical interfaces and build compelling visualizations with a range of JavaScript libraries.
By the end of the book you will have developed fully working interactive prototypes capable of sending data to and receiving data from a physical interface. Most importantly, Connecting Arduino to the Web will give you a taste of what is possible and the knowledge to create your own connected physical interfaces and bring the web into your electronics projects.

Indira is an accomplished developer and motion designer who has expertise in computer programming and broadcast graphics. For the last six years she has concentrated on web development and data visualizations. She currently works at Future Cities Catapult as a creative web developer where she has worked on prototypes and projects that have included interacting with Arduinos. She is also an active member in the development community and has just started a meet up in London on WebVR.
Indira holds a Masters in 3D Computer Animation from Bournemouth University, and a Masters in Computer Science from Birkbeck University of London. She has worked on web applications, interactive art installations, popular game titles, independent films and for network television.