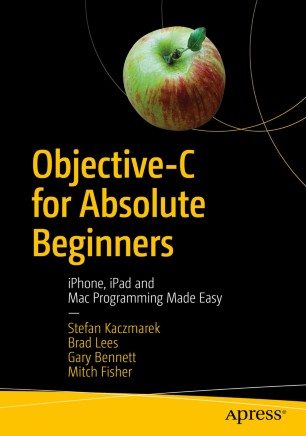 Learn Objective-C and its latest release, and learn how to mix Swift with it. You have a great idea for an app, but how do you bring it to fruition? With Objective-C, the universal language of iPhone, iPad, and Mac apps.

Using a hands-on approach, you'll learn how to think in programming terms, how to use Objective-C to construct program logic, and how to synthesize it all into working apps. Gary Bennett, an experienced app developer and trainer, will guide you on your journey to becoming a successful app developer. Along the way you'll discover the flexibility of Apple’s developer tools

If you're looking to take the first step towards App Store success, Objective-C for Absolute Beginners, Fourth Edition is the place to start.

Gary Bennett is president of xcelMe.com. xcelMe teaches iPhone/iPad programming courses online. Gary has taught hundreds of students how to develop iPhone/iPad apps, and has several very popular apps on the iTunes App Store. Gary's students have some of the best-selling apps on the iTunes App Store. Gary also worked for 25 years in the technology and defense industries. He served 10 years in the U.S. Navy as a nuclear engineer aboard two nuclear submarines. After leaving the Navy, Gary worked for several companies as a software developer, chief information officer, and resident. As CIO, he helped take VistaCare public in 2002. Gary also co-authored iPhone Cool Projects for Apress. Gary lives in Scottsdale, Arizona with his wife, Stefanie, and their four children.
Mitch Fisher is a software developer in the Phoenix area. He was introduced to PCs back in the 1980s, when 64K was a lot of memory and 1 Mhz was considered a fast computer. Over the past 25 years, Mitch has worked for several large and medium-sized companies in the roles of software developer and software architect, and had led several teams of developers on multi-million dollar projects. Mitch now divides his time between writing iOS applications and server-side UNIX technologies.

Brad Lees has more than 12 years of experience in application development and server management. He has specialized in creating and initiating software programs in real-estate development systems and financial institutions. His career has been highlighted by his positions as information systems manager at The Lyle Anderson Company, product development manager for Smarsh, vice president of application development for iNation, and IT manager at The Orcutt/Winslow Partnership, the largest architectural firm in Arizona. A graduate of Arizona State University, Brad and his wife, Natalie, reside in Phoenix with their five children.