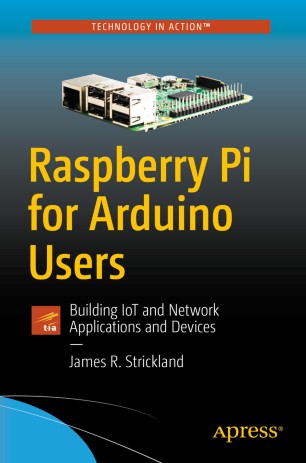 Leverage your Arduino skills in the Raspberry Pi world and see how to cross the two platforms into sophisticated programs.
The Arduino and Raspberry Pi communities overlap more than you might think. Arduinos can be expanded to have network capabilities with a variety of “shields,” all of which increase the cost and complexity of the system. By contrast, Raspberry Pis all run Linux, which is a very network-competent platform. The newest Pi, the Raspberry Pi Zero W,  is WiFi and Bluetooth capable. It makes far more sense to cross to the Raspberry PI platform; this book shows you how to do so.
You'll learn some survival level Linux system administration, so you know how to set the machine up and how to establish at least minimal security for your gadget.  You''ll set up and learn the Geany IDE on your Pi, which is fairly similar to the Arduino IDE.
You'll see that several projects use and explain the WiringPi system. This is deliberately similar to the Arduino's 'Wiring' functionality, which is how sketches interact with GPIO pins. You'll learn the differences between the GPIO pins of the two devices, and how the Pi has some limitations on those pins that the Arduino does not. As a final project, in an effort to escape some of those limitations, you'll attach an AtMEGA 328P to the Raspberry Pi and configure it as a real, 8MHz Arduino with the Arduino IDE running on the Pi, and learn how to have the two platforms communicate, giving you the best of both worlds.

Jim Strickland has spent his undergraduate, graduate, and professional careers in technical support and system administration—explaining computers and IT systems to others. He's used Unix-like OSs in various incarnations from Ultrix32 in the early 1990s to Slackware Linux in the mid '90s to OS X, Raspbian, and Xubuntu today. And he has experience with non-Unix-like OSes such as MS-DOS, Windows, Macintosh System 7, CP/M-80, and so on. He bought his first Arduino in 2010. Soldering that little board together offered him a crash course in digital electronics making beyond the "Insert board, load driver" level.
He has a master's degree in Communications Development, a BA in creative writing with minors in Computer Science and Psychology. He worked in the computer industry for several years before turning to a writing career. He is the author of Junk Box Arduino: Ten Adventures in Upcycled Electronics and has also written science fiction.