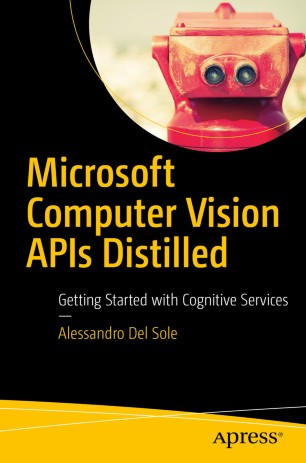 Getting Started with Cognitive Services

Imagine an app that describes to the visually impaired the objects around them, or reads the Sunday paper, a favorite magazine, or a street sign. Or an app that is capable of monitoring what is happening inside an area without human control, and then makes a decision based on interpreting an occurrence detected with a live camera. This book teaches developers Microsoft's Computer Vision APIs, a service capable of understanding and interpreting the content of any image.

Author Del Sole begins by providing a succinct “need to know” overview of the service with descriptions. You then learn from hands-on demonstrations that show how basic C# code examples can be re-used across platforms. From there you will be guided through two different kinds of applications that interact with the service in two different ways: the more common means of calling a REST service to get back JSON data, and via the .NET libraries that Microsoft has been building to simplify the job (this latter one with Xamarin).

After reading this book, you will be able to get started with AI services from Microsoft in order to begin building powerful new apps for your company or customers.

Who This Book Is For
Developers just getting familiar with artificial intelligence. A minimal knowledge of C# is required.

Alessandro Del Sole has been a Microsoft Most Valuable Professional (MVP) since 2008, and he is a Xamarin Certified Mobile Developer and Microsoft Certified Professional. Awarded MVP of the Year in 2009, 2010, 2011, 2012, and 2014, he is internationally considered a Visual Studio expert and a .NET authority. He has authored many books on programming with Visual Studio, Xamarin, and .NET, and blogs and writes technical articles about Microsoft developer topics in Italian and English for many developer sites, including MSDN Magazine and the Visual Basic Developer Center from Microsoft. He is a frequent speaker at Microsoft technical conferences.