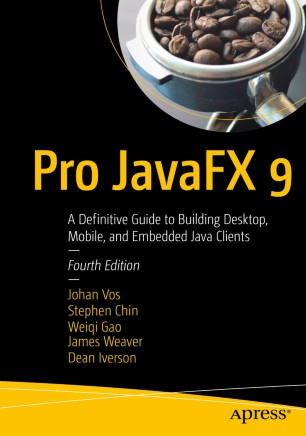 Use the JavaFX platform to create rich-client Java applications and discover how you can use this powerful Java-based UI platform, which is capable of handling large-scale data-driven business applications for PC as well as mobile and embedded devices. The expert authors cover the new more modular JavaFX 9 APIs, development tools, and best practices and provide code examples that explore the exciting new features provided with JavaFX 9, part of Oracle's new Java 9 release.Pro JavaFX 9: A Definitive Guide to Building Desktop, Mobile, and Embedded Java Clients also contains engaging tutorials that cover virtually every facet of JavaFX development and reference materials on JavaFX that augment the JavaFX API documentation.

New material in this edition includes JavaFX UI controls and CSS APIs for modularization. Additionally, there is coverage of the Shader DSL for JavaFX that allows you to generate Shaders for OpenGL and Direct3D. After reading and using this book, you'll have the knowledge to give you an edge in your next JavaFX-based project.

Johan Vos is a Java Champion who started to work with Java in 1995. As part of the Blackdown team, he helped port Java to Linux. With LodgON, the company he cofounded, he has been mainly working on Java-based solutions for social networking software. His main focus is on end-to-end Java, combining the strengths of back-end systems and embedded devices. His favorite technologies are currently Java EE/Glassfish at the back end and JavaFX at the front end. He contributes to a number of open source projects, including DataFX and the Android port of JavaFX.
Stephen Chin is a Java Ambassador at Oracle specializing in embedded and user interface technology and the JavaOne Content Chair. He has been featured at Java conferences around the world including Devoxx, JFokus, OSCON, JFall, GeeCON, JustJava, and JavaOne, where he three times received a Rock Star Award. Stephen is an avid motorcyclist who has done several Pan-European evangelism tours, interviewing hackers in their natural habitat and posting the videos on nighthacking-dot-com. When he is not traveling, he enjoys teaching kids how to do embedded and robot programming together with his 11-year-old daughter.
Weiqi Gao is a principal software engineer with Object Computing, Inc. in St. Louis, Missouri. He has decades of software development experience and has been using Java technology since 1998. He is interested in programming languages, object-oriented systems, distributed computing, and graphical user interfaces. He is a member of the steering committee of the St. Louis Java Users Group. Weiqi holds a PhD in mathematics.
Jim Weaver is an author, speaker, teacher, and developer in rich Internet application technologies such as JavaFX, and may be contacted at jim.weaver-at-javafxpert-dot-com.  He also is an engineer with Oracle.
Dean Iverson has been writing software professionally for more than 15 years. He is employed by the Virginia Tech Transportation Institute, where he is a senior researcher and rich client application developer. He also has a small software consultancy called Pleasing Software Solutions, which he cofounded with his wife.