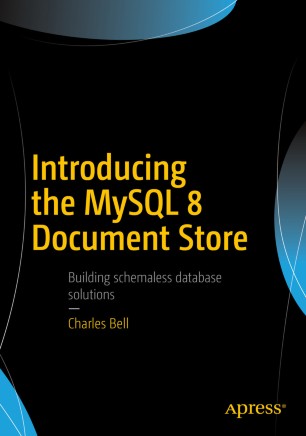 Learn the new Document Store feature of MySQL 8 and build applications around a mix of the best features from SQL and NoSQL database paradigms. Don’t allow yourself to be forced into one paradigm or the other, but combine both approaches by using the Document Store.
MySQL 8 was designed from the beginning to bridge the gap between NoSQL and SQL. Oracle recognizes that many solutions need the capabilities of both. More specifically, developers need to store objects as loose collections of schema-less documents, but those same developers also need the ability to run structured queries on their data. With MySQL 8, you can do both!
Introducing the MySQL 8 Document Store presents new tools and features that make creating a hybrid database solution far easier than ever before. This book covers the vitally important MySQL Document Store, the new X Protocol for developing applications, and a new client shell called the MySQL Shell. Also covered are supporting technologies and concepts such as JSON, schema-less documents, and more. The book gives insight into how features work and how to apply them to get the most out of your MySQL experience. The book covers topics such as:
What You'll Learn:

Charles Bell conducts research in emerging technologies. He is a member of the Oracle MySQL Development team, and is a senior software developer for the MySQL Enterprise Backup team. He lives in a small town in rural Virginia with his loving wife. He received his Doctor of Philosophy in Engineering from Virginia Commonwealth University in 2005.
Charles is an expert in the database field and has extensive knowledge and experience in software development and systems engineering. His research interests include 3D printers, microcontrollers, three-dimensional printing, database systems, software engineering, and sensor networks. He spends his limited free time as a practicing Maker, focusing on microcontroller projects and refinement of three-dimensional printers.