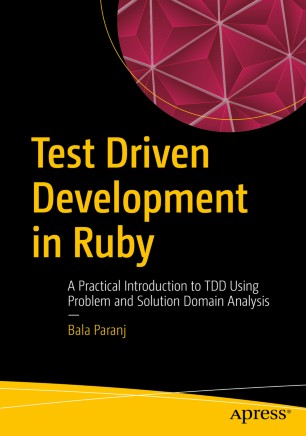 Learn the basics of test driven development (TDD) using Ruby. You will carry out problem domain analysis, solution domain analysis, designing test cases, and writing tests first. These fundamental concepts will give you a solid TDD foundation to build upon. Test Driven Development in Ruby is written by a developer for developers.
The concepts are first explained, then a coding demo illustrates how to apply the theory in practice. At the end of each chapter an exercise is given to reinforce the material. Complete with working files and code samples, you'll be able to work alongside the author, a trainer, by following the material in this book.
You will:

Bala Paranj has a masters degree in electrical engineering from Wichita State University. He has been working in the IT industry since 1996. He started his career as Technical Support Engineer and became a Web Developer using Perl, Java and Ruby. He has consulted for companies in the USA, Australia and Jamaica in finance, telecommunications and other domains.
He has professionally worked as a developer using TDD and pair programming for startups. He is the founder of Silicon Valley Ruby Meetup. He has been organizing Ruby, Rails and TDD related events since 2007. He has taught TDD Bootcamps and TDD tutorials for Silicon Valley Ruby Meetup members for more than 3 years.
He published an article in JavaWorld in 1999 on the Command Pattern. Java Tip 68: Learn how to implement the Command pattern in Java. He is also the content creator for the Whizlabs OOAD test simulator. This is the exam simulator for students preparing for IBM 486 Object-Oriented Analysis and Design with UML. He is the author of self-published book Rails 4 Quickly.