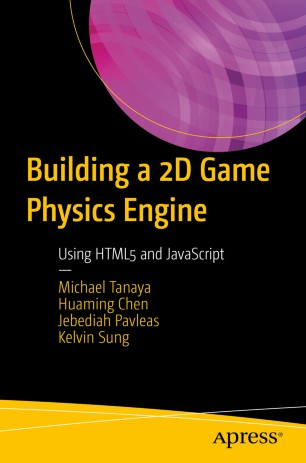 Build your very own 2D physics-based game engine simulation system for rigid body dynamics. Beginning from scratch, in this book you will cover the implementation technologies, HTML5 and JavaScript; assemble a simple and yet complete fundamental mathematics support library; define basic rigid body behaviors; detect and resolve rigid body collisions; and simulate collision responses after the collisions.
In this way, by the end of Building a 2D Game Physics Engine, you will have an in‐depth understanding of the specific concepts and events, implementation details, and actual source code of a physics game engine that is suitable for building 2D games or templates for any 2D games you can create and can be played across the Internet via popular web‐browsers.
What You'll Learn

Who This Book Is For
Game enthusiasts, hobbyists, and anyone who is interested in building their own 2D physics game engines but is unsure of how to begin.

“The heart of the book concerns several aspects of the physics and implementation of collision detection, and not only will this get you to some working code, but should give you enough to take away and try in other languages, without being propped up by libraries. The final demo project, and pointers to further exploration, should see you ready to build your own games.” (The MagPi, Issue 58, June, 2017)
Buy options