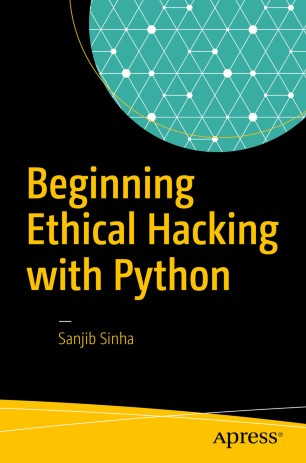 Learn the basics of ethical hacking and gain insights into the logic, algorithms, and syntax of Python. This book will set you up with a foundation that will help you understand the advanced concepts of hacking in the future. Learn Ethical Hacking with Python 3 touches the core issues of cyber security: in the modern world of interconnected computers and the Internet, security is increasingly becoming one of the most important features of programming.

Sanjib Sinha writes stories and codes - not in the same order always. He started with C# and .NET framework and won the Microsoft Community Contributor Award in 2011. Later the Open Source Software movement attracted him and he became Linux, PHP and Python enthusiast, specializing in and working on White Hat Ethical Hacking.
As a beginner he had to struggled a lot to find an easier way to learn coding. No one told him that coding is like writing - imagining a concept and making it a reality with the help of words and symbols. All through his books he has tried to help the beginners from their own perspectives.

“This book has an interesting premise–it offers to teach one how to accomplish ethical hacking tasks using Python. … Under this guise, the book gives a good introduction to using the Python programming language’s general features and spends the bulk of its pages teaching Python … . This book falls into the introductory category for the Python programming language; therefore, it is well suited for individuals new to the language. Summing Up: Recommended. All readers.” (F. H. Wild III, Choice, Vol. 54 (11), July, 2017)
Buy options