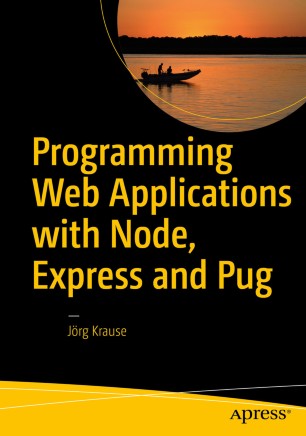 This book teaches you how to program modern web applications using the full Node.js platform, including Node.js on the server, Express for middleware and routing, and Pug (formerly Jade) to simplify the creation of views.
Node.js is the foundation of all full JavaScript apps and plenty of books cover its full usage. This book focuses on how to use it to create server-based, modern web applications. Using Node.js alongside Express and Pug - the brand new version of Jade - you can create modern web applications solely using JavaScript. This book teaches you how to structure and build your app from scratch, and make development easy.

Jörg Krause has been working with software and software technology since the early 1980’s, beginning with a ZX 81 and taking his first steps as a programmer in BASIC and assembly language. He studied Information Technology at Humboldt University, Berlin but left early, in the 90’s, to start his own company. He has worked with Internet Technology and software development since the early days when CompuServe and FidoNet dominated. He’s been with Microsoft technologies and software since Windows 95. In 1998, he worked on one of the first commercial e-commerce solutions, and wrote his first book in Germany, “E-Commerce and Online Marketing”, published by Carl Hanser Verlag, Munich. Due to its wide success, he started working as a freelance consultant and author in order to share his experience and knowledge with others. He has written several books for Apress, Hanser, Addison Wesley and other major publishers along with several self-published books—a total of over sixty titles. He also publishes articles in magazines and speaks at major conferences in Germany. Currently, Jörg works as an independent consultant, software developer, and author in Berlin, Germany. In his occasional spare time, Jörg enjoys reading thrillers and science fiction novels, and going on a round of golf.