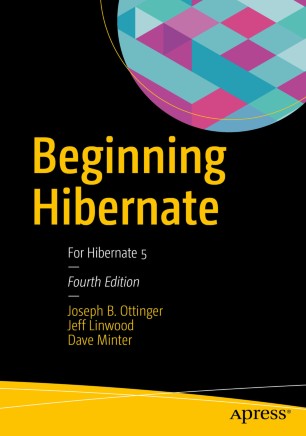 Get started with the Hibernate 5 persistence layer and gain a clear introduction to the current standard for object-relational persistence in Java. This updated edition includes the new Hibernate 5.0 framework as well as coverage of NoSQL, MongoDB, and other related technologies, ranging from applications to big data. Beginning Hibernate is ideal if you’re experienced in Java with databases (the traditional, or connected, approach), but new to open-source, lightweight Hibernate.

The book keeps its focus on Hibernate without wasting time on nonessential third-party tools, so you’ll be able to immediately start building transaction-based engines and applications. Experienced authors Joseph Ottinger with Dave Minter and Jeff Linwood provide more in-depth examples than any other book for Hibernate beginners. They present their material in a lively, example-based manner—not a dry, theoretical, hard-to-read fashion.

Who This Book Is For

Experienced Java developers interested in learning how to use and apply object-relational persistence in Java and who are new to the Hibernate persistence framework.

Dave Minter has adored computers since he was small enough to play in the boxes they came in. He built his first PC from discarded, faulty, and obsolete components, and considers that to be the foundation of his career as an integration consultant. Dave is based in London, where he helps large and small companies build systems that "just work." He co-authored Building Portals with the Java Portlet API and Pro Hibernate 3.
Joseph Ottinger is an expert software developer, coder and programmer. He has also served as technology evangelist GigaSpaces and a principle engineer at Red Hat. He was Editor in Chief of TheServerSide-dot-com. He is the author of Hibernate Recipes and Beginning Hibernate for Apress and has authored other books as well as articles.
Jeff Linwood has been involved in software programming since he had a 286 in high school. He got caught up with the Internet when he got access to a UNIX shell account, and it has been downhill ever since. Jeff has published articles on several Jakarta Apache open source projects in Dr. Dobb's Journal, CNET's Builder.com, and JavaWorld. Jeff has a bachelor's degree in chemical engineering from Carnegie Mellon University. He currently works for the Gossamer Group in Austin, Texas, on content management and web application syndication systems. He gets to play with all the latest open source projects there. Jeff also co-authored Professional Struts Applications, Building Portals with the Java Portlet API, and Pro Hibernate 3. He was a technical reviewer for Enterprise Java Development on a Budget and Extreme Programming with Ant.