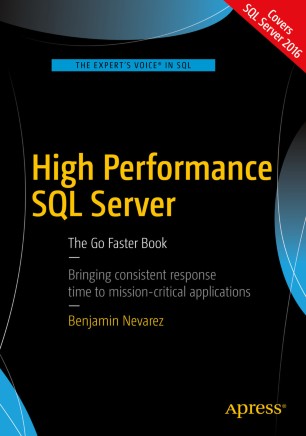 Design and configure SQL Server instances and databases in support of high-throughput applications that are mission-critical and provide consistent response times in the face of variations in user numbers and query volumes. Learn to configure SQL Server and design your databases to support a given instance and workload. You’ll learn advanced configuration options, in-memory technologies, storage and disk configuration, and more, all toward enabling your desired application performance and throughput.
Configuration doesn’t stop with implementation. Workloads change over time, and other impediments can arise to thwart desired performance. High Performance SQL Server covers monitoring and troubleshooting to aid in detecting and fixing production performance problems and minimizing application outages. You'll learn a variety of tools, ranging from the traditional wait analysis methodology to the new query store, and you'll learn how improving performance is really an iterative process.
High Performance SQL Server is based on SQL Server 2016, although most of its content can be applied to prior versions of the product. This book is an excellent complement to performance tuning books focusing on SQL queries, and provides the other half of what you need to know by focusing on configuring the instances on which mission-critical queries are executed.