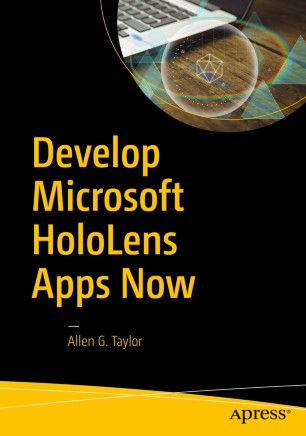 Get started as an application developer for the Microsoft HoloLens. The technology is new and this is the first book to describe the HoloLens wearable augmented reality device and provide step-by-step instructions on how developers can use the HoloLens SDK to create Windows 10 applications that merge holographic virtual reality with the wearer’s actual environment.

Best-selling author Allen G. Taylor explains how to develop and deliver HoloLens applications via Microsoft’s ecosystem for third-party apps. Readers will learn how HoloLens differs from other virtual and augmented reality devices and how to create compelling applications to fully utilize its capabilities.

Allen G. Taylor is an independent software developer, educator, and early adopter of HoloLens technology. He is the author of more than 40 books and speaks internationally on science and technology and their impact on society. Allen can be reached at allen.taylor@ieee.org. He blogs at allengtaylor.com and posts items of interest at moontube.wordpress.com. Allen's Twitter handle is @SQLwriter.