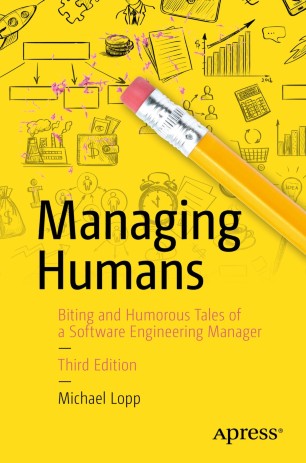 Biting and Humorous Tales of a Software Engineering Manager

Read hilarious stories with serious lessons that Michael Lopp extracts from his varied and sometimes bizarre experiences as a manager at Apple, Pinterest, Palantir, Netscape, Symantec, Slack, and Borland. Many of the stories first appeared in primitive form in Lopp’s perennially popular blog, Rands in Repose. The Third Edition of Managing Humans contains a whole new season of episodes from the ongoing saga of Lopp's adventures in Silicon Valley, together with classic episodes remastered for high fidelity and freshness.

Whether you're an aspiring manager, a current manager, or just wondering what the heck a manager does all day, there is a story in this book that will speak to you—and help you survive and prosper amid the general craziness of dysfunctional bright people caught up in the chase of riches and power. Scattered in repose among these manic misfits are managers, an even stranger breed of people who, through a mystical organizational ritual, have been given power over the futures and the bank accounts of many others.

Lopp's straight-from-the-hip style is unlike that of any other writer on management and leadership. He pulls no punches and tells stories he probably shouldn't. But they are magically instructive and yield Lopp’s trenchant insights on leadership that cut to the heart of the matter—whether it's dealing with your boss, handling a slacker, hiring top guns, or seeing a knotty project through to completion.

Writing code is easy. Managing humans is not. You need a book to help you do it, and this is it.

What You'll Learn
Who This Book Is For
Managers and would-be managers staring at the role of a manager wondering why they would ever leave the safe world of bits and bytes for the messy world of managing humans. The book covers handling conflict, managing wildly differing personality types, infusing innovation into insane product schedules, and figuring out how to build a lasting and useful engineering culture.

Michael Lopp is a veteran engineering manager who has never managed to escape the Silicon Valley. In over 20 years of software development, Michael has worked at a variety of innovative companies, including Apple, Pinterest, Palantir, Netscape, Symantec, Borland International, Slack, and a startup that slowly faded into nothingness. In addition to his day job, Michael writes a popular technology and management weblog under the nom de plume "Rands," where he discusses his management ideas, worries about staying relevant, and wishes he had time to see more of the world. His weblog can be found at RandsinRepose.com. Michael lives in northern California, never far from the ocean.

“I can very warmly recommend this book to anyone who already works in a software engineering management position--whatever level--or who thinks about a career in this direction. It will be entertaining for software engineers as well, at least for understanding how these management beings think and why they might do what they are doing. … Finally, it will be a fun read for anyone who has just some vague understanding of this management thing.” (Frank Pospiech, Computing Reviews, February, 2017)

“The book is a witty, hilarious, and insightful look into what it takes to manage people in a software engineering firm. … this is a great book for managers in any arena, but especially those who work in software engineering. It provides a comprehensive set of tools in the form of bite-sized chapters that can help any manager improve her relationships with subordinates. Summing Up: Highly recommended. General readers through professionals.” (A. Dantes, Choice, Vol. 54 (5), January, 2017)
Buy options