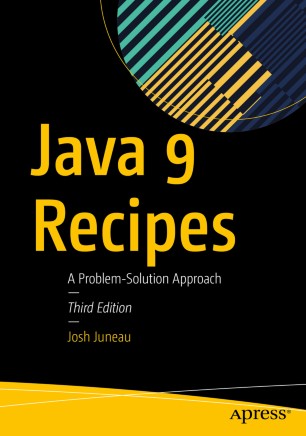 Quickly find solutions to dozens of common programming problems encountered while building Java applications. Content is presented in the popular problem-solution format. Look up the programming problem that you want to resolve. Read the solution. Apply the solution directly in your own code. Problem solved!

This revised edition covers important new features such as Java 9's jShell and the new modularity features enabling you to separate code into independent modules that perform discrete tasks. Also covered are the new garbage collection algorithm and completely revamped process API. Enhanced JSON coverage is provided as well as a new chapter on JavaServer Faces development for web applications.

What You Will Learn:

Josh Juneau has been developing software and enterprise applications since the early days of Java EE. Application and database development have been his focus since the start of his career. He became an Oracle database administrator and adopted the PL/SQL language for performing administrative tasks and developing applications for the Oracle database. In an effort to build more complex solutions, he began to incorporate Java into his PL/SQL applications and later developed standalone and web applications with Java. Josh wrote his early Java web applications utilizing JDBC and servlets or JSP to work with backend databases. Later, he began to incorporate frameworks into his enterprise solutions, such as Java EE and JBoss Seam. Today, he primarily develops enterprise web solutions utilizing Java EE and other technologies. He also includes the use of alternative languages, such as Jython and Groovy, for some of his projects.
Over the years, Josh has dabbled in many different programming languages, including alternative languages for the JVM, in particular. In 2006, Josh began devoting time to the Jython Project as editor and publisher of the Jython Monthly newsletter. In late 2008, he began a podcast dedicated to the Jython programming language. Josh was the lead author for The Definitive Guide to Jython, Oracle PL/SQL Recipes, and Java 7 Recipes, and a solo author of Java EE 7 Recipes and Introducing Java EE 7, which were all published by Apress. He works as an application developer and system analyst at Fermi National Accelerator Laboratory, and he also writes technical articles for Oracle and OTN.  He was a member of the JSR 372 and JSR 378 expert groups, and is an active member of the Java Community, helping to lead the Chicago Java User Group’s Adopt-a-JSR effort.
When not coding or writing, Josh enjoys spending time with his wonderful wife and five children, especially swimming, fishing, playing ball, and watching movies. To hear more from Josh, follow his blog at http://jj-blogger.blogspot.com. You can also follow him on Twitter at @javajuneau.

“This book covers the essential new features of the Java language. … this book will help readers ‘quickly find solutions to dozens of common programming problems encountered while building Java applications.’ I think it’s good for all levels of readers. Overall, it is a helpful book.” (Computing Reviews, November, 2017)
Buy options