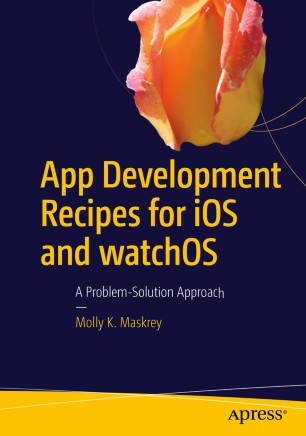 App Development Recipes for iOS and watchOS explores the technical side of app development with tips and tricks to avoid those little things that become big frustrations, outside of the realm of development, causing many people to throw up their hands and say “It’s just not worth the hassle!”
The experiential nature of this work sets it apart from other iOS and watchOS books. Even if you are a developer who is completely new to Swift, iOS or watchOS, you’ll find the right experienced-based answers to important questions like “Why do I need version control?”, “Why is testing so important?” and more specific problems directly related to iOS and watchOS development with Swift. We discover and summarize the most common problems and derive the solutions; not just a short answer and screenshot, but a systematic, logical derivation, that is, how we got to the solution.
After the introductory basics, each chapter delivers a problem statement and a solution. The experienced developer may, without losing anything, skip to whatever problem with which they are currently dealing. At the same time, we guide the less experienced developer through the process with focus on solving problems along the way.
What you will learn:

Who this book is for:
Developers who need to find specific solutions to common problems in developing apps for iOS and watchOS.

Molly K. Maskrey first learned software while a sophomore in high school on a Wang punch card computer where you manually created an octal machine language program by popping out chads on a single card. While getting her undergraduate degree, she programmed COBOL on IBM System/360 computers at banks in and around Tampa, Florida, moving on, in her 20s and 30s to work for various large Aerospace companies including IBM Federal Systems, TRW (now Northrup-Grumman), Loral Systems, Lockheed-Martin, and Boeing. As the lure and romance of working in big companies (was there ever such a thing?) started to wear off, she realized that a break was in order so she took several years off, moved to Maui and taught windsurfing at the beautiful Kanaha Beach Park.
Never one to stay still, Molly moved to Denver, Colorado where she jumped on the iPhone bandwagon opening one of the first screen repair companies, specializing in fast, 10 minute, screen repair. People came from nearby states to have their babies put back into pristine condition, and she made enough money to begin, not only app development, but iOS accessory design as well. In 2009 she, along with her life and business partner Jennifer, received approval from the Apple MFi (Made for iPod/iPhone/iPad) program on their first accessory, a credit card reader that connected through the 30-pin dock of iPod and iPhone devices, a good six months ahead of Square. In 2010 she and Jennifer founded Global Tek Labs, an iOS development and accessory design services company that is now one of the leading consulting services for new designers looking to create smart attachments to Apple devices.
That same year, Molly, under her previous persona published the first book, through Apress, on how to create accessories for the iPhone Operating System, still, to this day, the only major description of the process.
In 2014 Molly and Jennifer formed Quantitative Bioanalytics Laboratories, a wholly owned subsidiary of Global Tek to bring high-resolution mobile sensor technology to physical therapy and instrumented gait analysis (IGA).
Ms. Maskrey enjoys working on new and interesting technical projects, hosting wine and cheese parties for her friends, and her greatest passion, ballroom dancing. Talk technical projects with her and it will certainly be time well spent, but bring up International Cha-Cha or Viennese Waltz and not only will she become vigorously animated, but may start moving while talking…even if there is not a dance floor. She’s been known to spontaneously start Samba line dances at various big box retail stores on quiet Monday afternoons.
Molly lives in Parker Colorado with Jennifer, her partner of 26 years and their two Yellow Labradors and basement dance practice floor.