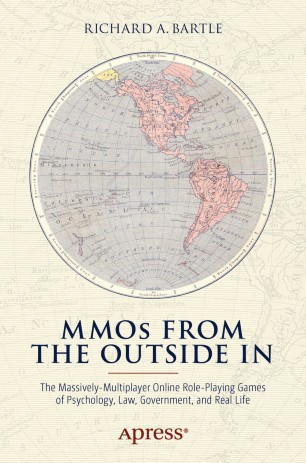 MMOs from the Outside In

This follow-up volume to MMOs from the Inside Out is a further collection of bold ideas, information, and instruction from one of the true pioneers of Massively-Multiplayer Online Role-Playing Games. Whereas its predecessor looked at how MMOs can change the world, MMOs from the Outside In: How Psychology, Law, Culture and Real Life see Massively-Multiplayer Role-playing Games looks at how the world can change MMOs – and not always for the better. The aim of this book is to inform an up-coming generation of designers, to alert and educate players and designers-to-be, and to caution those already working in the field who might be growing complacent about society’s acceptance of their chosen career.
Playing and creating MMOs does not happen in a bubble. MMOs are so packed with potential that those who don’t understand them can be afraid, and those who do understand them can neglect their wider impact. Today's examples are little more than small, pioneering colonies on the shore of a vast, uncharted continent. What monsters lurk beyond the horizon? What horrors will explorers bring back to torment us? MMOs from the Outside In is for people with a spark of curiosity: it pours gasoline on that spark.
It:
• Explains how MMOs are perceived, how they could – and perhaps should – be perceived, and how the can contribute to wider society.
• Delves into what researchers think about why players play.
• Encourages, enthuses, enrages, engages, enlightens, envisions, and enchants.
• Doesn't tell you what to think, it tells you to think.
What You Will Learn:
• The myriad challenges facing MMOs – and to decide for yourself how to address these challenges.
• What MMOs bring to the world that it didn’t have before.
• How MMOs are regarded, and what this means for how they will be regarded in future.
• That playing and designing MMOs has implications for those who don’t play or design them.
Whom This Book is For:
MMOs from the Outside In is a book for those who wish to know more about the wider influence of game design in general and MMO design in particular. It's for people who play MMOs, for people who design MMOs, and for people who study MMOs. It's for people with a yearning to see beyond the worlds of their imagination and to change the world around them.

Richard A. Bartle has been playing and designing MMOs longer than anybody, having in 1978 co-written MUD - the progenitor of the entire genre. His famous Player Types model has seen widespread adoption by the MMO industry and beyond, and the online test bearing his name has been taken more than 800,000 times. His book, Designing Virtual Worlds, is the classic text on the subject and he is an influential writer on all aspects of online game design. In 2010, he was the first recipient of the prestigious Game Developers Choice award of Online Game Legend. He is Honorary Professor of Computer Game Design at the University of Essex, England, where it all began. He’s also innumerable characters in MMOs.