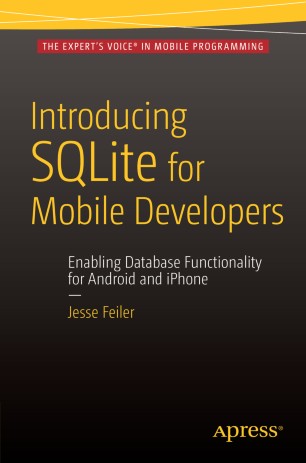 This brief book is an introduction to SQLite for both iOS and Android developers.  The book includes an optional introduction to SQL, a discussion of when to use SQLite,  and chapters devoted to using SQLite with the most likely programming languages and then goes through adding a simple database to an Android or iOS app and finally a chapter on managing the app’s life cycle.
What You Will Learn:
• The basics of SQLite
• The SQL you need to use SQLite effectively
• How to integrate a database into your mobile app.
• How to maintain the app
Who this book is for:
This book is for Android or iOS developers who wish to use a lightweight but flexible database for their applications. It mobile development experience but does not assume anything but very basic database knowledge.

Jesse Feiler is a developer, consultant, and author specializing in database technologies and location-based apps. He has worked with databases and data management on computers from mainframes to iPhone, iPad, and Apple TV using data management tools from DB2 (IBM) and DMSII (Burroughs) to Enterprise Objects Framework and Core Data, MySQL, Oracle,  and, of course, MySQL.
In the early days of the web, he built the page caching mechanism for the Prodigy web browser for Mac using a relational database library similar in some ways to SQLite.
He is the creator of Minutes Machine the meeting management app, as well as Saranac River Trail app a guide to the Trail that includes location-based updates as well as social media tools. His apps are available in the App Store and are published by Champlain Arts Corp (champlainarts-dot-com). As a consultant; he has worked with small businesses and nonprofits on projects such as production control, publishing, and project management usually involving FileMaker.
His books include:
• Swift for Dummies (Wiley, 2014)
• iOS App Development for Dummies (Wiley, 2014)
• iWork  for Dummies (Wiley, 2012)
He is heard regularly on WAMC Public Radio for the Northeast's The Roundtable. founder of Friends of Saranac River Trail, Inc. A native of Washington DC, he has lived in New York City and currently lives in Plattsburgh NY.
He can be reached at northcountryconsulting-dot-com (consulting) and champlainarts-dot-com (app development).