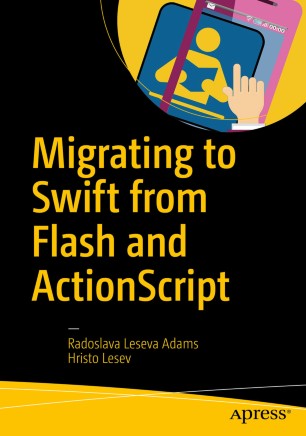 Migrating to Swift from Flash and ActionScript

This book builds on your knowledge of ActionScript and takes you on the fast track to developing iOS apps with Swift, Apple’s latest language. Swift’s syntax is easier to understand than Objective-C for people already familiar with ActionScript. At the same time, it offers a number of new features and richer expressiveness than either ActionScript or Objective-C.

Switching to a new platform usually involves migration on three levels: tools, workflow, and programming language. Migrating to Swift from Flash and ActionScript is structured as a guide that will help you on each level with step-by-step tutorials. Apart from the tutorials, it comes with recipes for some of the most popular mobile development topics: social network integration and messaging, taking advantage of device capabilities, networking and working with local and iCloud data, advertising in your app or game, and working with 2D and 3D graphics. The book also includes a final chapter that takes you through Apple’s App Store submission process. Don’t just build your apps, sell them.

Radoslava Leseva Adams is a software developer and programming book author. Her affair with programming languages began in the early 90s, when her father handed her a book on Basic as a form of summer holiday entertainment. Since then she has built a career out of freely jumping between different languages and platforms, including C, C++, Delphi, Java, ActionScript, Objective-C and most recently Swift. She passionately hates wordy manuals and having to click more than once to do a build. Radoslava and her brother, Hristo, run EasyNativeExtensions.com and DiaDraw.com, where they help ActionScript developers do cross-platform programming with AIR Native Extensions.
Dr. Hristo Lesev is a software developer at heart, passionate speaker, educator and entrepreneur. Having had long experience with C++, C# and ActionScript for desktop and mobile, lately he can be heard more and more often advocating for Swift as the latest and greatest. While not busy developing mobile apps, Hristo enjoys teaching other developers as an assistant professor at Plovdiv University, Bulgaria. He is obsessed with computer graphics and can be found coding 3D stuff late at night.